Do a Meaningful Thing in Life Wanxiang Pay Tribute to Mr.Lu Guanqiu, the Late Chairman of the Group 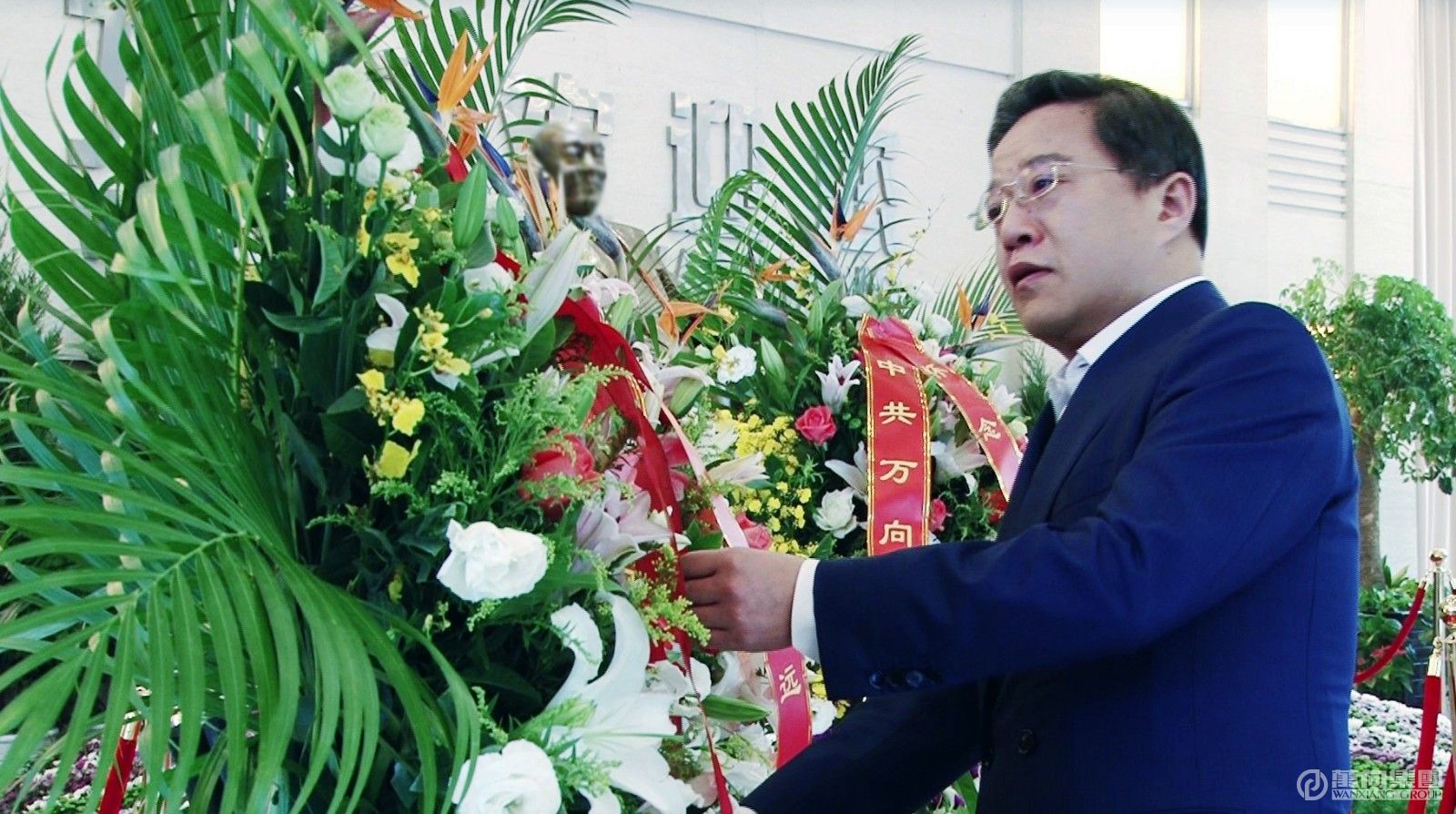 This spring, I want to have a chat with you

Let's stop for a little while to recall those years

Having been going out for so long, my dream goes to the margin of the sky

With light, warm music, the commemoration of first anniversary of passing of Mr. Lu Guanqiu, the late founder and Chairman of Wanxiang Group was held in Wanxiang Memorial Hall.

Several days ago, Wanxiang released an official notice on commemorating the chairman of the board of directors and carrying forward the spirit of him. It stated that to honor the memory of Wanxiang's late founder and Chairman based on the decision from Wanxiang's Board of Directors, promote his spirit to unite our team, follow our dream, be grateful and strive for Wanxiang's future, the appropriate commemorative events will be carried out to commemorate the first anniversary of the passing of Mr. Lu Guanqiu on October 25, 2018 and Wanxiang's headquarters would take a day off to be in memory of Mr. Lu Guanqiu. Affiliated units of Wanxiang shall decide to wholly or partly take a day off according to the actual circumstances. Memorial Halls or places would be set up in Wanxiang's headquarters and Wanxiang America Corporation to pay tribute to “Wanxiang's eternal Chairman”.

The schedule includes flower-basket-laying ceremony for the statue of the Chairman, watching a commemorative documentary about Mr. Lu Guanqiu Do a Meaningful Thing in Life and an exhibition with the same name.

It pointed out the chairmen, vice chairmen, executive directors, supervisors and general managers of the group’s affiliated companies should participate in the commemorative activities with the headquarters if time permits. The exhibition lasted until October 29th, and Wanxiang employees were free to visit the exhibition.

According to the notice, the flower-basket-laying ceremony would start at 9 a.m. However, the Memorial Square and adjacent areas were full of people before 8:30 a.m. Many employees had come here as early as they could to pay tribute to the honorable Chairman.

The memorial theme was "missing and memories". Cherish the memory of the founder by thinking about work and practical struggle, writing an original song commemorating the chairman and the 40 years of reform and opening-up, making a statue of the Chairman, holding an exhibition of the Chairman's deeds, as well as a management book of the Chairman and a collection of articles commemorating the Chairman in preparation. Yesterday, the United Front Work Department of CPC Central Committee released A list of the country's top 100 outstanding private entrepreneurs over the past four decades of reform and opening-up, and the Chairman is the only deceased entrepreneur on the list This is the precious honor and lofty mission given to Mr. Lu Guanqiu and Wanxiang by the Party. From this year on, we need to fully understand the late Chairman's entrepreneur spirit. In the future, we still have a lot of hard work to do, and we must keep learning. Wanxiang's future is to be a great and respected company. This can't be achieved without us. By adhering to the late Chairman's statement of "to tell the truth and do the pragmatic thing", we shall not forget our original heart and fight our way with gratitude.

Yesterday he left us but today his spirit is still here. Mr. Lu had led Wanxiang “from the field to the world” and to go back to the field. This memorial event was simultaneously held in the headquarters and Wanxiang America Corporation. We paid tribute and expressed gratitude thoughtfully on this special day to our “beloved father” in a simple but meaningful way. We also remembered Mr. Lu, a pioneer of the times, who dedicated his lifetime to Wanxiang Group and social and economic progresses.

Through his lifetime, Mr. Lu Guanqiu was always pragmatic and innovative, endeavoring to build up an enterprise and make it strong. He always integrated enterprise goals into national and social goals and took it as his mission to promote social progress. He won recognition and care from party and government leaders of all previous sessions for his reform spirit and responsibility awareness. In the National Model Worker symposium in 2013, General Secretary Xi Jinping spoke highly of Mr. Lu Guanqiu, "Comrade Lu Guanqiu is among our first township enterprise reformers and now he is still in the reform forefront. In the past 40 years, many people like them come along all the way. Great waves wash away the sand. Now looking back then, how many men of the day were there in that period? When I was working in Zhejiang Province, I knew Comrade Lu Guanqiu was a law-abiding, reasonable man with profound modesty and prudence. He was always pragmatic and humble and kept pace with the ever-changing world. He has been thinking about Wanxiang all the time so that it is always in the position to lead the trend."

What Mr. Lu Guanqiu had left to the world is not only the material wealth, but also the spiritual wealth, which is his unique and distinctive entrepreneurial spirit. This spirit is the source of motivation for Wanxiang people to carry forward the cause, and it will also inspire the whole society to take the initiative to create a happy and beautiful life, which is worth learning and remembering forever.

The exhibition of Mr. Lu's life and achievements not only transmits the warmth of the years but also be full of Wanxiang's sentiments, offering a spiritual purification for Wanxiang's staff.

Tough conditions bring heroes who can stand brave to create legends. The late founder and Chairman Lu started up his own business in 1962 and founded Wanxiang in 1969, and he had always been brave to reform, innovate and explore. And he was excellent in leading Wanxiang to go international by persistently researching clean energy, successfully practicing promoting agriculture development through industry, contributing to the society with a warm and persistent heart, and firmly following Communism. He took the lead in the age and led Wanxiang to keep pace with the times and be pragmatic and seek the new development, and Wanxiang has achieved sustained and steady development over the past half century. He strived all his life to explain "to tell the truth and do the pragmatic thing", which is Wanxiang's spirit, and practice "be pragmatic, be at the forefront and lead the tides of the times", which is Zhejiang spirit. He demonstrated the wisdom and responsibility of Chinese enterprises to the world. Therefore, Mr. Lu had been well respected and known as "evergreen" of Chinese entrepreneurs.

"Do a practical thing in a day, do a new thing in a month, do a great event in a year and do a meaningful thing in life". It is the job goal that Mr. Lu Guanqiu set to all Wanxiang's employees, and is also his own life description. Mr. Lu Guanqiu, the eternal Chairman of Wanxiang people and you will live forever in Wanxiang people's heart. You never left us. Your start-up experiences and entrepreneur spirit will always encourage us, motivate us not to forget our dreams, be grateful and hardworking to build Wanxiang Innovation & Energy-gathering City and make your dream come true. This is also our dream: make Wanxiang be a respected, enterprise of hundred years.

Chairmen, Deputy Chairmen, executive directors, supervisors, general managers and some specified staff from the company took part in the memorial event with the staff in the headquarters. About 10,000 Wanxiang employees voluntarily came to the Memorial Halls and places to pay their homage to the eternal Chairman by watching the documentary Do a Meaningful Thing in Life and a life stories exhibition with the same name.